As is proven with the DFC system, so the nozzles from Euro Air will not create any problems of entrainment due to the construction of the nozzle.

Nozzle systems can be used in many applications but mainly in rooms with a high ceiling due to the long throw generated by the nozzle.

This is of course depending on the amount of nozzles and/or if the nozzles are used in a hybrid system.

Normally, the orientation of the nozzles depends on the application - whether it is used for heating, cooling or ventilation.

If the nozzles are used for heating they must point down towards the floor in order to force the hot air downwards due to the lesser density.

If the nozzles are used for either cooling or ventilation it is most common to place them either horizontally or upwards. This will eventually create mixing ventilation in the area around the textile system.

When the layout does not allow for an optimum placement of the textile ducts, then this system will eventually provide a very efficient way of ventilating the room when a good air distribution is is required. 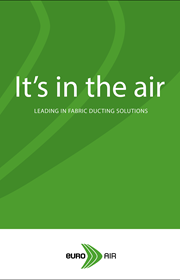 Learn more about the advantages of fabric ducting and Euro Air. 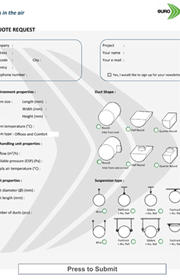 Get a competitive price for your fabric ducting materials.

It's in the air. Fabric ducting will provide you with an efficient air distribution and a healthy indoor climate in office buildings, schools, laboratories, industry and other applications.